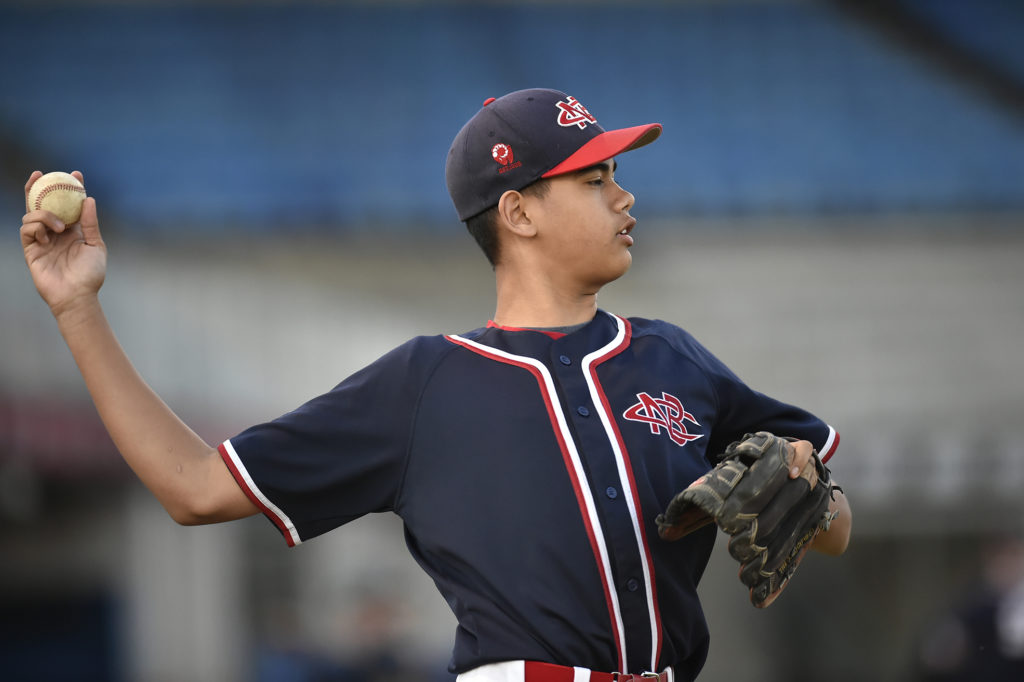 Baseball is a beautiful family affair for father-son duo Kevin and Anthony Hemmerijckx.

The pair play at Newport Rams Baseball Club, where they’ve been welcomed with open arms since joining the sport not too long ago.

Anthony started playing a few years back, and he quickly fell in love with baseball and all the different positions he could try on the field. He’s had a go at catching, and he also plays first base, second base and outfield.

After coming down to his local club and giving baseball a try, he found that he couldn’t get enough. “I saw baseball as a new opportunity and an interesting sport, something that I could get good at,” Anthony said. “Newport is a family-friendly club. We enjoyed it our first year and we stayed.”

Anthony has had an awesome time with the Rams, especially in the 2019/20 VSBL season as he won the U16 Metro West Grand Final with his teammates. It’s safe to say he succeeded in his goals for the season, and he has his sights set on continuing this success in the years to come. “I want to break into the higher levels of the senior team,” Anthony said. “I want to train hard, practice, get better at things and learn from other people.”

Although he started playing a bit later than some of his friends, Anthony recognises that Newport offers a warm and welcoming environment where everyone is involved, including beginners. “The coaches are nice and it’s a pretty good club,” Anthony said. “When I first started, I couldn’t really do anything but as time went on, I got better at both aspects of the game, including new positions. Knowing more positions makes me a more versatile player, and I have more opportunities to play out in the field if someone is out.”

Anthony can't get baseball off his brain, especially as his journey has even taken him overseas, getting to play in the U.S. with more experienced players. He hopes to pursue a bright future in baseball and encourage others to take up the sport too. “It’s a very good sport, it’s fun to play,” Anthony said. “Although it may seem hard at first, once you start playing you will enjoy it quite a lot. I keep getting better every day, and every time I train, I find something to work on back home.”

Despite a later start, Anthony has quickly caught up and even had the chance to play alongside his father Kevin in the VSBL Division 1 Thirds this past season. Kevin plays second base and outfield for Newport as he embraces an exciting activity he can share with Anthony.

Despite a later start, Anthony has quickly caught up and even had the chance to play alongside his father Kevin in the VSBL Division 1 Thirds this past season. Kevin plays second base and outfield for Newport as he embraces an exciting activity he can share with Anthony.

While many kids join baseball to follow in their father’s footsteps, the opposite is true for this pair.

“I got involved because of my son,” Kevin said. “He started playing baseball and I was there all the time. I thought I might as well do some exercise and learn a new sport, so I got into it that way.”

After starting baseball at 46 years old, Kevin has quickly caught on. “It’s a unique sport, it’s kind of stop and go, and when there’s action there’s a lot of action,” Kevin said. “I’ve been getting used to that rhythm and working on understanding the language. The club is getting used to me always asking what does that mean!”

Over the past two seasons Kevin has noticed big improvements, learning how to throw the ball properly and also how to move out of the way and avoid getting hit by pitch. It’s all about fun and friendship for Kevin, who wants to continue developing his skills and helping the younger players get their heads in the game too.

He knows he and his son are in the right place. “I think for Newport Baseball Club it’s all about the culture and being together,” Kevin said. “It’s one big group of people trying to better the sport and help each other. It’s all about teaching. ”

The avid Chicago Cubs fan absolutely loves the sport and looks forward to a lot more fun in the future. “I really enjoy watching the young kids play and see how they get better,” Kevin said. “I hope everyone plays their hardest to be successful on and off the diamond.”

He aim to keep boosting his batting and fitness levels in the years to come. “There’s a fair bit of physical exercise involved in it, a lot of running and throwing exercises,” Kevin said. “It’s a team sport with a bit of banter and fun, which is what attracted me to it."

Kevin and Anthony both hope to see others take up baseball. “Give it a go, I mean I’m really the poster child for it, starting when I was 46,” Kevin said. “Find a good club where people will take the time to teach you the game and all the details along with it. Newport really is a community club with good comradery and culture.”