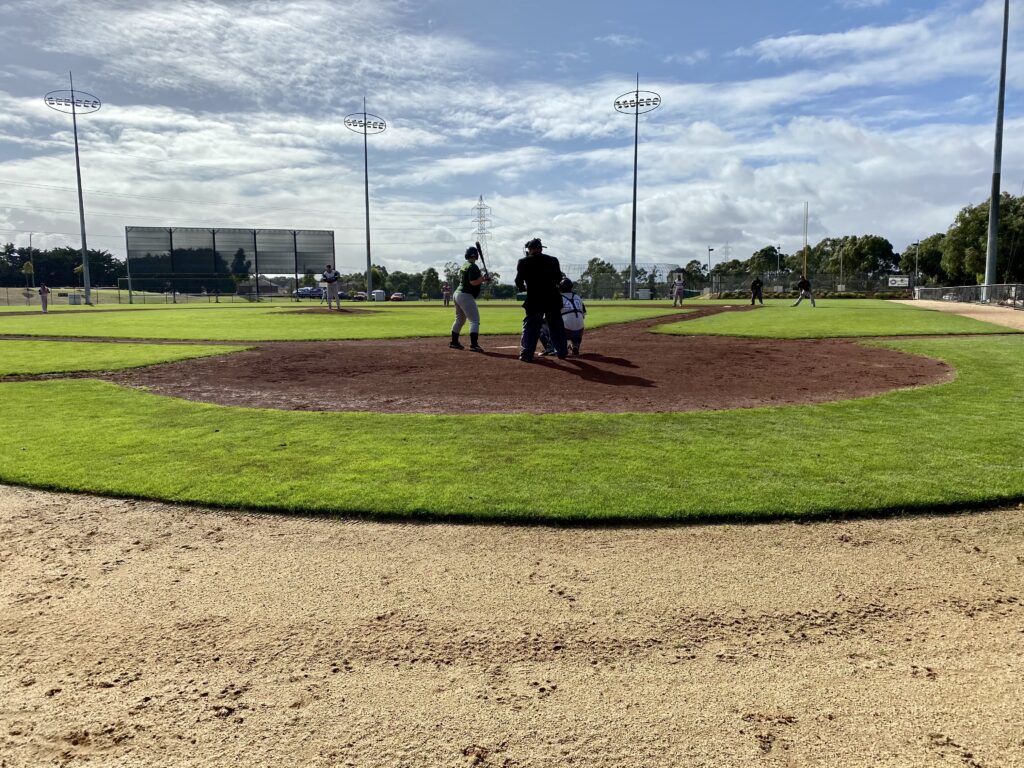 The 2021 Victorian Masters Baseball Carnival continued at Geelong Baseball Centre on Saturday with teams battling it out in good spirit for a shot at the finals.

Click HERE to view the official GBA page for updates and photos.

Coburg produced an eight-run shutout win over Sandringham in the opening game of the day, starting with a five-run first dig which quickly ballooned out to seven runs after two innings.

Coburg added one more in the fourth, all the while keeping the Sandringham bats quiet with the pitching combination of David Simpson and Peter Locklier steering the side to victory.

Tony Morosi and Chirs Myberg were on the mound for Sandringham.

All of the runs in this game came within the first two frames as the Gold Diggers scored their only two in the very first dig.

The Pandas responded with five runs at the bottom and shut out the Gold Diggers for the rest of the game, while extending their lead by four runs as the second came to a close.

Kyle Murrells got the start for the Pandas and Michael Alldis entered in relief in the fifth inning.

Andrew Fox was on the mound to begin the game for the Gold Diggers until John Patte came on to pitch in the second after catching the first inning.

The Sloths scored a run in the first inning but that was the extent of their offense as the Tomatoes shut them out for the remainder of the game.

It took until the third inning for the Tomatoes to score, pulling ahead by a run when they when they plated two.

The Tomatoes’ bats were firing at the bottom of the fourth, scoring seven runs to finish off the game.

Big Cat Tomatoes had Adam Hill on the mound for the entire game while Jason Humbles and John Emery shared pitching duties for the Sloths.

Big Cat Tomatoes kept on fighting against the Bees, ending in a five-run win thanks to a big seven-run fifth inning.

The Bees opened up the scoring in the first with one run before the Tomatoes got ahead with a four-run effort at the top of the second. The Tomatoes kept a two-run lead after the Bees added one more at the bottom.

The Bees kept the Big Cats scoreless in the third and the lead changed again when the Bees scored three runs at the bottom of the third.

A scoreless fourth inning saw the score remain a one-run lead to the Bees until a big fifth inning from the Tomatoes saw them go ahead by six runs. The Bees scored once more in the bottom of the sixth to end the game but they couldn't make up the deficit.

Ross Hornstra got the start for the Bees with Greg Di Blasi and Rob Di Blasi coming in as relief in the fifth and sixth innings respectively. Tim Hanson was on the mound for the Tomatoes to start before Scott Baillie entered in the fourth.

The Tigers got their first win on the board by scoring in all five innings over the Sloths. They opened with seven runs and followed that up with six in the second. One more in the third and three runs in each of the last two innings gave the Tigers a dominant win.

The Sloths avoided the shutout by putting together three runs in the bottom of the fifth.

Doncaster recorded their first win with a big performance over the Bees. The game was tied at two apiece after the first but Doncaster turned up the heat from there, scoring seven in each of the next few innings as David Medlin threw well.

The Bees managed two runs in the second and one in the third.

The Sloths got on the board early, netting one run in the first and adding two more in the third while shutting out the Gold Diggers through the first four innings.

Tony Cornish pitched for the Gold Diggers before Michael Sullivan came in as relief in the fifth inning.

Steve Ellis was handed the ball to start the defense for Sloths, with Cam Hubbard coming on in the fifth inning.

Richard King led the Gold Diggers on the mound as they cruised to victory, bouncing back after a morning loss to the Sloths.

The Gold Diggers scored four runs in the first and another four in the second before a five-run third. They finished off the game with a 7-run fourth inning for their second win of the tournament.

The Tomatoes picked up right where they left off after two big wins on day 1. Myles Barnden and Ben Pittaway pitched for the winning side as the Tomatoes scored three in the first and six in the second.

The third inning was scoreless on both sides before the Tomatoes tacked on two in the fourth and one more in the fifth.

Both defenses were strong in the opening inning with neither side scoring, but the Sloths broke through in the second with three runs. They went on to score once more in both the third and the fourth before finishing with a three-run fifth.

Fitzroy's two runs came in the bottom of the third as the Sloths went 2-for-2 on the day.

The Red Sox claimed a victory over Doncaster this morning, scoring in the first inning and then pulling ahead late in the game after Doncaster tied it one-all in the fourth.

The Red Sox took a two-run lead during the fifth dig, and then doubled the lead in the next frame to secure win number two of the tournament.

This high-scoring game started with the Bald Eagles scoring two, although their lead was cut in half by the end of the inning when the Sloths scored one.

The second frame started with the Bald Eagles extending their lead by four, but the Sloths sensed a challenge and responded with seven runs at the bottom.

Two tight, scoreless frames followed before the Eagles put together a seven-run effort in the fifth. The Sloths never backed down, scoring six to claim victory at the bottom of the fifth.

Brendan Robinson started on the mound for the Sloths with Shannon Groenendyk pitching in relief. Warren Attard and Sheldon Christie threw for the Bald Eagles.

The Tip Rats came from behind with a seven-run fifth inning to claim the win, their first of the tournament. They scored two in the second to start the scoring, although the Rebels fought back to cut the margin in half at the bottom.

The Rebels managed to get ahead at the end of three innings after shutting out the Tip Rats at the top and securing three runs of their own.

It turned into a one-run game when the Tip Rats brought in a run at the top of the fourth and shut out the Rebels at the bottom.

The Tip Rats cruised ahead in the fifth and never looked back to finish four-run winners at the end of the game, although the Rebels did tack on two at the very end.

Andrew Banks was handed the ball first for the Rebels with Glenn Farrell coming on to pitch in relief the fifth.

Nathan Taylor was the starting pitcher for the Tip Rats before Ben Morris entered in the fourth.

It was a walk-off win to the Cods in a low-scoring game against the Tip Rats this afternoon.

The Tip Rats scored a run in each of the first three innings before the Cods got on the board with one in the third and another in the fourth.

A scoreless fifth inning kept the score at 3-2  in favour of the Tip Rats until the Cods penciled in the winning two runs at the bottom of the sixth, marking their first win of the weekend.

The Sloths won both of their games today after a late six-run rally in the fourth. The Cods scored one in the third but gave up the lead, falling short of back-to-back victories.

The Pandas followed up on a 9-0 win over the Tip Rats last night with another win on Saturday afternoon. Neither side could score in the first three innings, but the Pandas eventually broke through with three in the fourth and seven in the fifth.

The Bald Eagles scored just one in the fifth to end the game after Michael Peters and James Clow took turns on the mound.