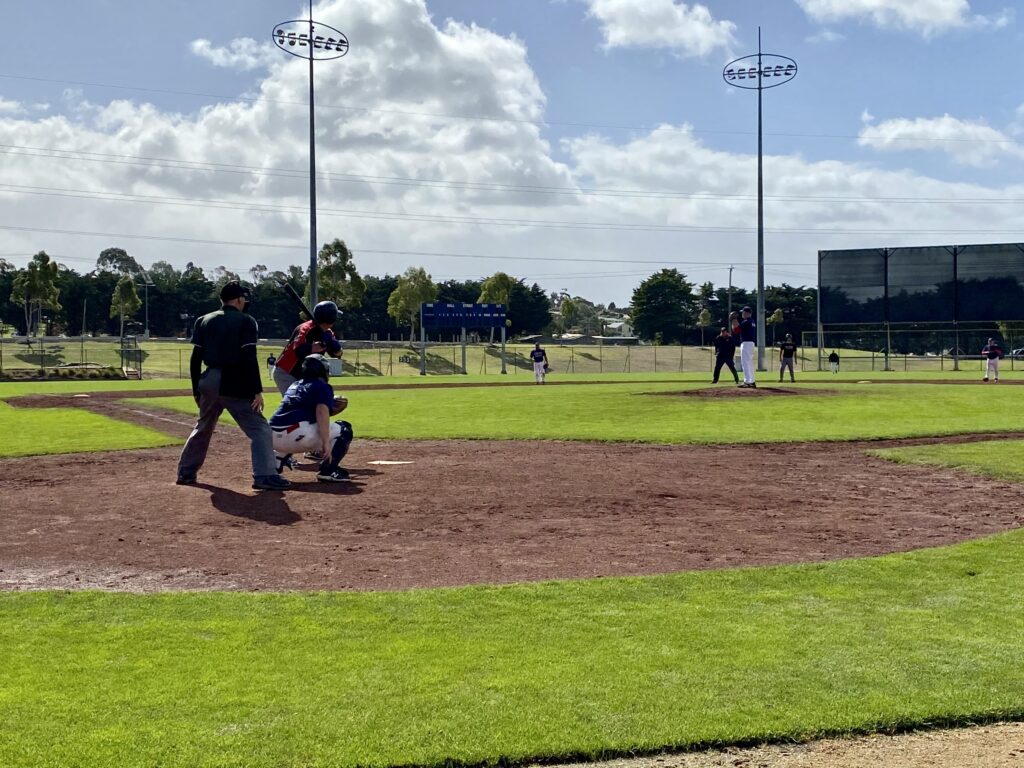 Thank you to East Belmont and Guild Baseball Clubs for hosting a great weekend of baseball.

Click HERE to view the official GBA page for updates and photos from a fantastic weekend of masters baseball.

The Bees opened the morning with six runs, and despite giving up two in bottom half, they were able to keep rolling from there. The Bees scored three in the third and two in the third.

The Sloths weren't going down without a fight, managing five runs in the bottom of the fourth although the Bees still came away with the win.

Ross Hornstra and Andrew Hamilton pitched for the Bees while Sean O'Halloran handled pitching duties for the Sloths.

The Tigers won 20-3 over the Sloths on Day 2 and won in similar fashion over Doncaster. Tassy scored in four of the five innings while Doncaster got just two on the board in the final frame.

Tassy's big innings included two in the first, six in the second, four in the third, and seven in the fifth.

The Gold Diggers picked up two runs at the top of the first to kickstart proceedings in the game against Doncaster though the home side went ahead by two runs after scoring four at the bottom.

Doncaster added five to its score at the bottom of the second, while the Gold Diggers got one back in the top of the third. They scored another in the fifth inning but Doncaster's hitters weren't done, scoring two more at the bottom to see the game out.

Neil Southwell was the starter for Doncaster, assisted by Dale Robertson in relief in the fifth.

Geoff Freeman got the start, finishing two innings on the mound for the Gold Diggers. Wayne Pollock came on as relief in the third while Bill Leropoulos entered in the fifth.

Coburg ran out to a three-run lead during the second inning after a two-run first dig, managing to shut down the opposition bats for three innings.

After Coburg's three runs, the Tomatoes came back into the game with two runs at the bottom of the fourth.

The strong defense ensured Coburg didn't steer further ahead and the Tomatoes went into the bottom needing two runs to win, which they managed for a big victory.

David Rosser spent the entire game on the mound for Big Cat Tomatoes, while David Simpson and John McBride shared the duties for Coburg.

Darren Wilcox, Marshall Skinner, and Keith Klein handled pitching for Sandringham as the team came within one.

The Pandas had Michael Alldis and Greg Buzza on the mound with Rob Barnes catching behind the plate.

The Pandas led 2-1 after the first and extended their advantage by one in the second and four in the third. The fourth inning saw the Pandas score one while Sandringham got two. Sandringham scored another four in the bottom of the fifth but fell by just one run as the Pandas kept up the pace to get into finals.

The Pandas finished atop the ladder but lost out to the Tomatoes in the final as the Big Cats stayed undefeated. The winners scored five in the first and one in the fifth while giving up one in the second and three in the fourth.

Rob Hogan pitched until David Rosser came in for the Tomatoes in the fifth. The Pandas had Michael Alldis on the mound for four before Kyle Murrells entered in the fifth.

Fitzroy scored three runs at the top of the first but that's where the offence finished for the side as the Rebels closed them out for the remainder of the game.

The Rebels fought ahead after scoring five runs at the bottom of the first inning, earning an 11-run lead at the completion of three. They finished the game in the fourth with three more runners scoring to claim victory.

Rebels pitcher Anthony Sullivan was on the mound through the entire four innings and did well with the defense behind him.

Darren Hill started for Fitzroy until he was swapped for Paul Blakeney in the fourth inning.

The Tomatoes scored four to start the game and kept it going from there, adding one in the third and seven in the fourth as Chris Nicholas and Mark Jones were solid on the mound. This result marked their fourth win of the weekend.

The Sloths sealed the deal on their trip to the final with a comprehensive performance over the Rebels thanks to a few good innings. They finished with three wins going into last game of the day.

The Tomatoes had Simon Pole and Simon Ratcliffe on the mound as they finished the tournament in style with a six-run win.

The Sloths kept their finals hopes alive with a win over the Tip Rats, although the Rats got two on the board to start.

The Sloths were behind by two until the fourth when they tied the game, and eventually pulled ahead by six in the fifth. Cam Williams followed Gavin Smith's turn on the mound for the winning side while Luke Sherwell, Paul Cameron, and Trevor Elliot threw for the Tip Rats.

The Cods worked their way to an early two-run lead and by the end of the second, they were ahead by seven. One more run came around in the third while Doncaster avoided the shutout by scoring three in the fifth.

The Pandas put together two seven-run innings to open the game, adding three more in the third and a final four in the fourth while shutting the Rebels out. The Pandas also booked their place in the final.

The Red Sox missed out on a spot in the finals as the Bald Eagles came back to win it in the last two innings. The Red Sox were in a good position with Luke Hornstra and Davis Long pitching and the offense taking a 1-0 lead in the second.

Troy Waterman and Warren Attard pitched for the winning side as they finished fourth.

The Sloths got one on the board to start the game but soon gave up seven to the Pandas. The eventual winners went on to score two more in both the second and the third.

David Morris, Daniel Conway-Jones and Brendan Robinson pitched for the Sloths while Cameron Forbes, Ross Hipke, and Russell Spear threw for the Pandas.