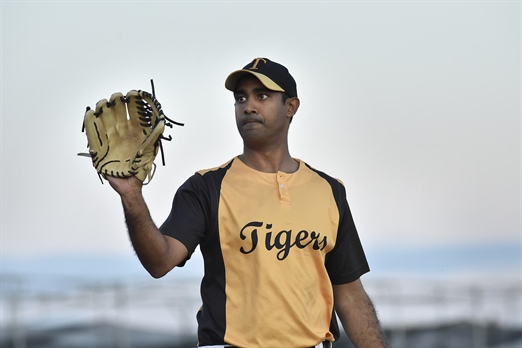 As club coach, Donavon is determined to see his teams improve and help players unlock their true potential. Having spent the past eight years with the club, Donavon loves the Tigers and looks ahead to seeing what the VSBL Division 1 club can do. “We pride ourselves on having a good culture for people, including those who have never played before and those who want to try a different club,” Donavon said. “We are trying to create a really good culture with competitive training and a fun environment.”

After first picking up a ball and a bat at the age of six, Donavon was hooked on the game and he hasn’t looked back since. He has had plenty of playing experience that shaped him into the coach he is today, including representing Victoria on junior state teams as well as playing for the Melbourne Aces and the Victorian Claxton Shield team.

Donavon played for Australia as both a junior and a senior and enjoyed six years of playing professionally too. Taking the field for South Africa in the 2009 World Baseball Classic was another big moment for him.

“My personal favourite memory would be pitching in the WBC against Cuba,” Donavon said. “That was a phenomenal experience for me personally to represent South Africa - where I was born - on the big stage against the best of the best. That was definitely a highlight.”

It’s memories like these that drive his determination at the club level, something players can look up to and learn from. The Tigers have fun each and every week out on the field because they have great chemistry. “We’ve got a pretty big playing list and everyone loves being around each other and training and playing together,” Donavon said. “That chemistry is probably one of the biggest things for us.”

As a whole, Upwey Ferntree Gully has had a solid season under Donavon’s watchful leadership and guidance. While the Division 1 firsts are just outside the top four with two games to go, the reserves are in third place and set to play Cheltenham in the semi-finals. The Tigers thirds finished 10-6-1 in fifth place, just shy of finals as well.

Not only did Donavon make a difference as a coach this season, but he also made big contributions as a player, batting .327 with a .456 on-base percentage in 18 games. He’s also pitched remarkably well, with a 2.34 ERA across 50 innings.

For Donavon it’s important to find the right balance between coaching and playing. “As a coach, you have to have everyone’s abilities and mindsets at the forefront,” Donavon said. “You kind of take yourself out of the picture and you have to focus on your players.”

Donavon embraces the opportunity to concentrate on individual players and help them get more out of the sport. “Being a player-coach is challenging because I’ve got to perform myself as well and I still love to play,” Donavon added. “When you’re playing you’re focusing on how you can help the team and what you can do, and as a coach you’re focusing on everybody in a sense.”

Upwey Ferntree Gully has faced tough competition all season long, something Donavon anticipated and prepared for. “Ultimately it’s going to be how we want to play and how we want to train that will dictate how far we can go,” Donavon said.

With the season quickly wrapping up, Donavon remains committed to the club and his goals. “I love the club and I’m always looking forward to being around the members at our club,” Donavon said. “My goals as a club coach are to see as much success as we can, from the firsts all the way down through to our junior program and just developing that program as best I can. But ultimately, I’d love to get a Division 1 flag.”

Donavon can’t imagine his life without playing and coaching baseball. “I keep doing it because I love it, I loved it ever since I started playing,” Donavon said. “I probably love coaching now that I’ve been in it for a long period of time, I’ve really found an enjoyment in being a coach and teaching.”

At the end of the day, Donavon hopes that more people give baseball a try. “Do it, jump in and learn it,” Donavon said. “It’s difficult and it’s challenging on a lot of different levels but it’s one of the greatest games you could play.”