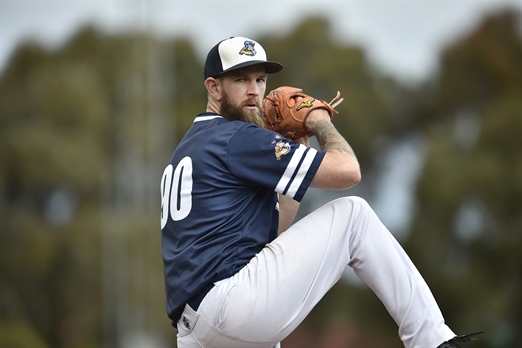 Werribee Giants pitcher Josh Lee has not only enjoyed a strong 2019/20 VSBL season, but also a long and decorated baseball career.

Starting his baseball journey with Bacchus Marsh Baseball Club, Josh was inexperienced but quickly got more comfortable with the sport. He spent his junior years there, where he flourished on the field and developed an undeniable passion for baseball. Josh went on to become a key figure at Werribee Baseball Club, strengthening the team’s pitching roster and helping to keep the Giants competitive year in and year out.

Playing in both the summer and winter seasons, Josh sometimes questions whether he should continue to play on, but ultimately the answer always remains the same. “After a big pitching outing or something like that, I roll over and can’t feel my arm. I ask myself ‘Why do I do this?’ but it’s just pure enjoyment,” Josh said.

The sense of comradery he gets from playing with his mates keeps Josh’s spirits up, even on bad days and after tough outings. Josh knows that every season can bring its challenges, but also its own bit of fun and his triumphs are a true reflection of how much he loves the sport.

Josh credits achievements like making the Victorian Under 18 state team and throwing a perfect game against Bonbeach - where he struck out 14 out of 15 batters - as crucial memories in his baseball career. It was moments like these that drove his dedication to hone his craft on and off the field.

Playing away from Werribee in the winter, Josh looks forward to reconnecting with his teammates in every summer season. That friendship has been important as the team continues to chase grand final glory in hopes of working their way back into the top tier of the Victorian Summer Baseball League.

“Werribee is in Division Two is, so we’re up there. I think we missed one year of finals in the last four years, so we’re working hard,” Josh said. “To be a part of those guys, we’ve all got the same goal. We might have our own little separate goals as well but as a team our goal is to get back to Division One. I definitely want to be a part of that.”

Josh and his fellow Giants know that in order to reach their goal, the team needs to stay on the same level across the season. They had a terrific first half, finishing with a 12-4 record before the break to put them in second place behind Williamstown. That's where they are now, sitting at a 17-6 record with three games to go as they keep pace with the Wolves. Now, the plan for the rest of the season is to create success by letting their game plan flow, without overthinking and getting too caught up in the technicalities.

“The Werribee guys, we definitely succeed when we’re having fun. When we overthink and get too technical or too fine with the way we’re playing and just stop having fun, we don’t win,” Josh said. “When we’re laughing and joking around, we win baseball games, so we’ve just got stay with having fun.”

Of course, every player has individual goals and achievements they wish to work toward, and Josh isn’t any different. Last season, he saw improvements in his pitching abilities, and he came into this season with a focus on keeping his ERA down.

“I missed out on the pitching title by 1.3 ERA and I’m like ‘What else do I have to do?’ so for myself I want to get better again,” Josh said. “I want that pitching title this year.”

Josh has had some stellar performances so far this season, striking out a total of 56 batters and proving to be one of Werribee’s most reliable starters. He’s made 15 appearances so far with a 3.59 ERA, something he will look to improve on this year as the final stretch of the season arrives.

“I want to get better for myself,” Josh shared. “I hold myself at a pretty high standard, so I don’t want to fall away from that. I had a pretty good summer last year and I just want to build on that with the ball and the bat cause I’m one of the rare guys who can hit as well.”

No matter what the final outcome is this season, Josh remains excited about the upcoming opportunities at Werribee Baseball Club, as the club places an emphasis on junior baseball.

“With Werribee Baseball Club, we’re expanding out,” Josh said. “We’re starting to get a couple little satellite clubs to go back into Werribee for a summer club so the amount of people that are around baseball in Werribee is growing and why wouldn’t you want to be a part of that? There’s just so many new people to meet, different ethnicities, it’s fantastic.”

Ultimately, Josh is prepared to work hard in Division Two but understands that there are often difficulties each season as the division is never the same year on year.

“Every year you never know what you’re going to get. Teams get different imports in and stuff like that,” Josh said. “In the landscape of Melbourne baseball, there’s so many different clubs so close together. You never know what you’re going to walk into especially with the best of three series. You don’t know how many pitchers a team has and what they can do, so that’s a hurdle in and of itself, the unexpected.”

That’s part of the fun though, Josh admits, as going out there and playing competitive baseball every weekend is very rewarding. The Giants need to make sure their players are easily able to adapt to different competitors if they are to push into division one. “I think we’re in a pretty good spot,” Josh said. “We just have to work a little bit harder.”

Josh is looking forward to the remainder of the season and making more memories with the Giants. “We’ve got the goal of getting back to Division One, bringing the club back to where it should be,” Josh said. “But we try to have a lot of fun too because baseball in its purest form is supposed to be fun.”