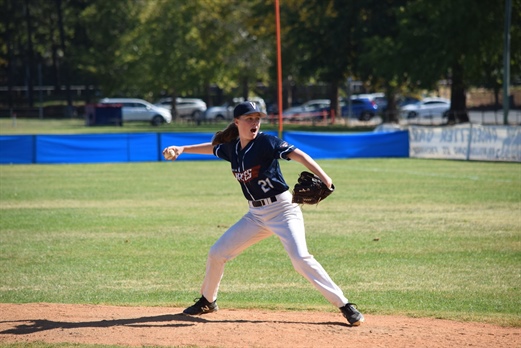 Keeley Harrison Continues to Shine on the Diamond

Keeley Harrison is on a mission to make her baseball dreams come true. At 15 years old, she has already recorded some impressive accomplishments, including a spot on the Victorian Youth Women’s Team and several notable award nominations.

As an avid pitcher who also plays second base and outfield, Keeley is embracing the next chapter of her baseball career at Doncaster Dragons Baseball Club, playing in the VSBL Women’s competition. “My plans for summer baseball are to continue at Doncaster Baseball Club and get a chance to play with some of my friends and improve my baseball skills more and more for the next winter season,” Keeley said.

If this past year has shown Keeley anything, it’s that she’s on the pathway to great success, and her next year of baseball looks even brighter than her last. Not only does her summer season with Doncaster seem promising, but she was also recently nominated for the Leader Community News Local Sports Stars Award. Plus, earlier this month she was named as a recipient of the Jagajaga Sports Awards after being nominated by her school principal for her commitment to supporting sport in her local community.

Keeley is eager to cap off the year on a high note, striving for more success after taking out the Pitching Award at the Australian Youth Women’s Championships (AYWC) in April. She first stepped on the field in 2017, and now with a few years of baseball under her belt, Keeley has developed an undeniable love for the game and a desire to push herself and continue improving. The support of her coaches and teammates this season will once again help her achieve her goals. “My coaches have pushed me and challenged me over the last three years so that I can become the best player I can possibly be.”

Keeley is incredibly thankful for her coaches, and she says they have kept her involved in the sport along with her awesome teammates. “Without them encouraging me and making game days ten times better, I wouldn’t enjoy being there as much as I do,” Keeley said. “I keep playing baseball because I enjoy the challenges that come with it, as well as how on edge you are throughout the game, not knowing how it could end or when.”

Despite missing out on the Grand Final, Keeley and her winter team at Watsonia Saints Baseball Club had a solid season, something she’s hoping to replicate this summer. After developing her skills at Preston Pirates Baseball Club, Keeley has moved to Doncaster Dragons Baseball Club to play with the women’s team.

Being around other successful female baseball players makes Keeley feel right at home. She’s had her fair share of exposure to representative role models after making State Teams in both baseball and softball this year. “Morgan Doty is a person in baseball who I look up to, as she won the same award as me at the national championships but for the Victoria blue team,” Keeley said. “I  have also watched her play centre field for Australia and she is amazing.”

Keeley set a goal for herself to make the 2019 Youth Women’s Team, and she made it happen by putting in her best efforts and training hard with her winter coaches. “I was really happy that all of my hard work had paid off and I had earned a spot in the team, and was even more excited to be training and competing with my teammates who had become some of my closest friends,” Keeley said.

After she and her teammates went on to secure a bronze medal finish at the AYWC, Keeley came back with more confidence than every before, having won the pitching award much to her surprise. She’s learned some valuable lessons from representing Victoria, which she will continue to apply to her baseball ambitions moving forward.

Keeley is looking to continue getting stronger out on the mound and in every facet of the game, which she will have the opportunity to do this summer. Overcoming her fears and facing challenges in the past year has also made Keeley feel more comfortable with her game. “During the tournament, I went through some rough games where I didn’t play my best, and that was the hardest thing to get over because I kept thinking I wasn’t good enough,” Keeley said. “With the support of my friends and coaches around me they really helped me become better and fix my mistakes.”

Keeley threw 6.2 innings with a 0.00 ERA at the AYWC, and she is eager to record similarly impressive statistics as she gives the new VSBL season her best shot. She has her sights set on growing into the best baseball player she can be, which will hopefully open up more representative opportunities for her. “The girls who competed in the Little League and Junior League World Series inspire me, as one day I would want to travel to another country to play and represent Australia,” Keeley said. “One of my main baseball goals would be to make the Australian team and travel around playing a game that I love so much.”

Outside of baseball, Keeley hopes to one day attend university and study forensic science or psychology. Her mother Sally Harrison has no doubt that Keeley will make it happen, especially after watching her daughter succeed in such high-pressure games. “My future hopes for Keeley are that she is happy in whatever she is doing no matter where she is in the world whether she is playing baseball or not,” Sally said.