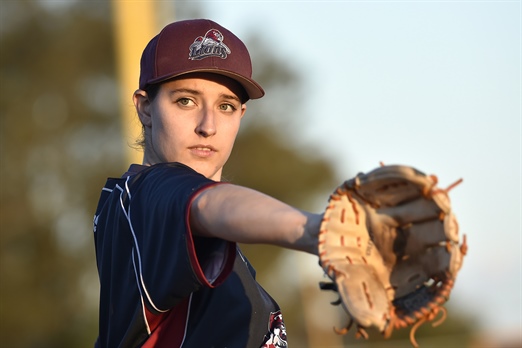 Shannon Crawford has thoroughly enjoyed her first season as head women’s coach at Fitzroy Baseball Club, and it isn’t over yet.

The Lady Lions have been putting together strong team performances week in and week out, with teams in both VSBL Women’s Division 2 and 3.

Shannon relies on comradery and team unity as she leads the Lions through the season. “I just want to provide a learning environment where everyone’s comfortable to ask the silly questions and do their own thing to get better,” Shannon said.

After playing at Latrobe University in the winter, Shannon’s friends encouraged her to join Fitzroy for the summer season. She has had a great experience playing in Australia, especially as she’s taken on coaching opportunities with Latrobe Uni and Fitzroy that help her grow as a player and a person.

Even though Shannon has tried to take a break in between seasons, she always finds herself ready to get back on the field. “By the end of the break I’m like I got to get back on a field," Shannon said. “I just keep coming back and I can’t get away.”

As the 2019/20 VSBL season turns toward finals, Shannon and the Lions are in high spirits. “I’m trying to challenge the girls that I’m coaching to better themselves and learn a lot in baseball.”

Although the Lions would love to make finals, no matter what there will be plenty they can take away from this season, most importantly amazing memories of playing together. “I was amazed at how quickly I was welcomed into the fold since I only joined last season,” Shannon said. “Everyone’s just so kind, ready to go the extra step to help out anyone new or take on a new responsibility.”

As Fitzroy embraces new players with open arms, Shannon encourages new players to give it a shot and keep working hard during training and gamedays. “Take the leap of faith and do it if you haven’t done sport before, if you’ve never done baseball before, it’s a super welcoming community,” Shannon added. “Everyone’s always ready to help you learn and improve and just clap you on the back when you do something well.”

Working with a diverse and determined group of women has been eye-opening and exciting for Shannon and her fellow Lions. “This season in particular, we’ve got a lot of brand new girls and they’re a bit shy and in their shell still,” Shannon said. “I hope I can teach them to assert themselves, at least on the baseball field, to give them that first step into growing as people. I think baseball is a great atmosphere to provide for that kind of stuff.”

Shannon is no stranger to challenges herself, including being cut from her college team in Iowa. “It pushed me into throwing Javelin for the track team, which made me grow and learn from that failure,” Shannon said. “I saw another door open when that one had shut, and it paved the way for me to move to Australia which has been fantastic.”

Baseball has taught Shannon many things that she applies to her life both on and off the diamond. “I’ve really learned you’ve got to fight for what you want, and you’ve got to keep pushing,” Shannon said. “As everyone says, baseball is a game of failure. Learn to celebrate the little wins and when there’s a big one, really take your time to appreciate it, acknowledge it and keep persevering through.”