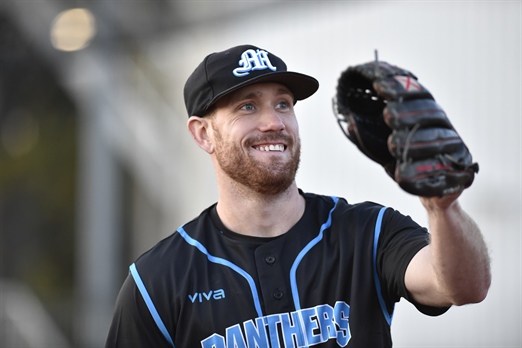 It was a VSBL season to remember for Zack Kamerman.

Not only was it his first-ever VSBL season, but it was also his first time playing in Australia. The American right-handed pitcher came over as Moorabbin’s import for the season, and he enjoyed every moment with the Panthers.

Zack continues to chase his baseball dreams, with his independent baseball career including a championship with the High Desert Yardbirds in Los Angeles, as well as stints in Bakersfield and Kansas City. But for the past six months, his focus was on giving Australian baseball a red-hot crack.

After meeting Australian players back home in independent ball, he got connected with Moorabbin coach Ben Laux. Before he knew it, he was traveling 20+ hours to make it to Australia from Huntsville, Alabama. He faced his jet-lag head on by going to practice on the same day he arrived.

“The travel was worth it, it’s a beautiful place,” Zack said. “The second I stepped on the field, I knew it was a fun environment. I had so much fun with all the guys that I didn’t want to go to bed, I just wanted to chill with the team. Everyone was super welcoming, and it was such a good environment.”

That was just the beginning of an amazing season for Zack as he focused on making a difference to Moorabbin and improving his own game at the same time. “Being a pitcher, there’s always something you can work on,” Zack said.

Zack was a big team player as Moorabbin made it into the VSBL Division 2 semi-finals before falling to Williamstown. He proved his versatility, batting .360 with 32 hits in 23 games, including four doubles, one triple, three home runs and 25 RBIs. With an on-base percentage of .408 and only nine strikeouts all season long, he proved to be an offensive threat to many teams while also serving as a standout starting pitcher. Out on the mound in the regular season, Zack had a 2.24 ERA over 92.1 innings with 94 strikeouts.

Zack’s contributions as a player were welcomed by Moorabbin in a successful year for the club, with the Reserves and Thirds joining the U16 State and Women’s Division 3 East teams as Grand Final winners. The Panthers also loved having Zack as a coach for the U16 Metro Team. Under his leadership and guidance, the Panthers made it to the finals, ultimately falling just short of the premiership flag but nonetheless it was a great season that only further fuelled Zack’s commitment to coaching and helping young players follow in his footsteps

All in all, playing for Moorabbin gave Zack new opportunities that he’ll never forget. Now Australia is another place on his list he can tick off thanks to baseball, a passion that has allowed him to make friends all over the world. He can’t get enough of his favourite sport, even after trying his hand at soccer, basketball and football growing up. “There’s just something about it,” Zack said. “It just keeps drawing you back in and even when you think you’re done with it, you’re not.”

As a personal trainer outside of his baseball career, Zack’s entire life is centred around the sport. “There’s a lot of things that bring me back to it,” Zack said. “Pitching wise, it’s standing on that mound and running the game. Every season I step on the mound and look around, it’s a just a cool feeling.”

Zack embraces everything about baseball, not only his pitching passions but also the chance to hit, throw and catch out on the field. “I still learn stuff in every game I play,” Zack said. “Rules happen I’ve never seen before; baseball is a never-ending learning experience for me.”

Playing alongside his teammates and making long-lasting memories with his friends is another reason why Zack can’t imagine his life without baseball. “Baseball builds a lot of relationships and friendships,” Zack said. “Every season with a different team and different guys can be hard but that also makes it a lot of fun, and I know people all over the world because of that.”

No matter where his journey may take him next, Zack has the fond memories of this season and his proudest sporting moments to back him up and keep him motivated. One thing he will never forget is throwing a no-hitter in his senior year after moving to a new school. “I was told I wouldn’t really go anywhere and that my baseball career was over, but in the second game I threw a no hitter,” Zack recalled. “I got in the paper and it helped me a lot to get my spot in college. Being told you’re not going to do it and then doing it is nice.”

Zack hopes to see more players pursue their passions and see where the journey takes them, whether that be indy ball, the big show, or anything in between. His advice for young players is simple. “No one can tell you not to try and no one can stop you, so you might as well go for it.”