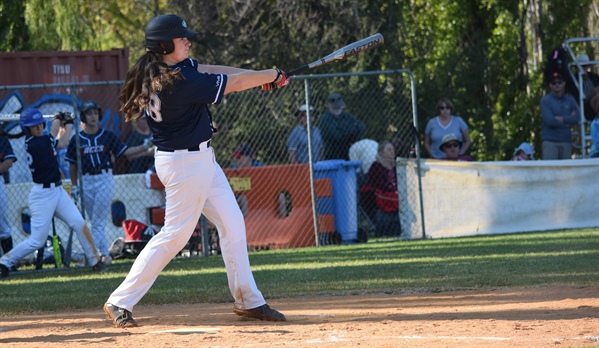 Aspen McGovern Looks Ahead to Big Summer of Baseball

Aspen McGovern is determined to make her baseball dreams come true. She has been striving toward her goals, one big baseball moment at a time. The enthusiastic and energetic 15-year-old brought home a bronze medal with the 2019 Victorian Youth Women’s Team in her first-time representing Victoria, and she is ready for another great summer season with Springvale Lions.

Growing up, she loved watching her brother play, and it wasn’t long before she made her way onto the diamond when she was 8 years old. Seven years later, her initial interest in the sport has blossomed into an undeniable love for the game, especially when she’s pitching or playing 1st and 2nd base. “I keep playing because I love the game and how it’s an individual game as much as it’s a team game,” Aspen said. “It’s as mental as much as it is physical. I’ve also made a lot of friends through the game so that keeps it fun, even when I’m in a slump.”

Aspen currently plays for East Belmont Saints of Geelong Baseball Association in the winter and Springvale Lions in the summer. “The women’s pathway in Geelong is slowly building, which is great to see, and the program at Springvale is awesome,” Aspen said. “The women involved are great players, coaches and mentors and are really encouraging to all players.”

Having such a strong support system gave Aspen the push she needed to challenge herself and try out for the State Team. She originally wasn’t planning on doing so, until her teacher convinced her to go for it. “I had nothing to lose, and I really owe it to her as it was one of the best experiences,” Aspen said. “The try outs were a little challenging but once I found out I made the team, I was over the moon.”

Leading up to the team’s big trip to Canberra for the 2019 Australian Youth Women’s Championships, Aspen enjoyed the intensity of the training sessions. “The coaches helped us get to the best standard we could,” Aspen said. “Before the tournament I was really nervous but my mum, dad and a few teachers were really supportive, and knowing they were all proud of me even if I didn't do well made it easier.”

Although the girls were nervous on opening day of the National Championships, they found their footing and came back to take out a third place finish. Aspen performed at her best throughout the tournament, focusing on her timing and her fielding, which she had worked hard on during training. “It was rewarding knowing I helped the team out.”

From recovering in the pool every day to stealing home to tie up the bronze medal game, the National Championships were full of highlights for Aspen. Although an injury kept her from playing much of the winter, she’s ready to take what she learned at the tournament and keep moving forward.

Looking ahead toward the future, Aspen wants to improve her batting and suit up for the State Team for the second time. “Hopefully I get to play for Victoria again and play a good summer and do well at school,” Aspen said.

While baseball fills up most of her time, Aspen also enjoys school, music, playing with her dogs and spending time with her family and friends. She has dedicated supporters who encourage her to try her best on and off the field. “Lots of people inspire me. I have mum and dad that are really supportive, teachers that help me and senior players I want to be like,” Aspen said.

Looking up to role models Shae Lilywhite, Simone Wearne and Mandi Avent, Aspen has been able to learn from them. “They have been incredible to watch,” Aspen said. “They are both so highly respected by everyone and they are a big reason as to why I play for Springvale.”

When she’s not playing baseball, Aspen can be found traveling across the country with her dad, checking out a variety of baseball games in a beloved tradition for the father-daughter duo. “I love watching the pros and learning from them, and the road trips with dad are pretty fun too,” Aspen said.

After such a terrific year, Aspen’s father Stewart McGovern hopes his daughter shoots for the stars. “Aspen had wanted to play for Victoria for a long time, and I was thrilled she made the team,” Stuart said. “Not once has baseball been a chore for her. She loves it – the games, the travel, the friends and the teammates. That makes it really enjoyable for me too. It’s never hard to go to the ballpark.”