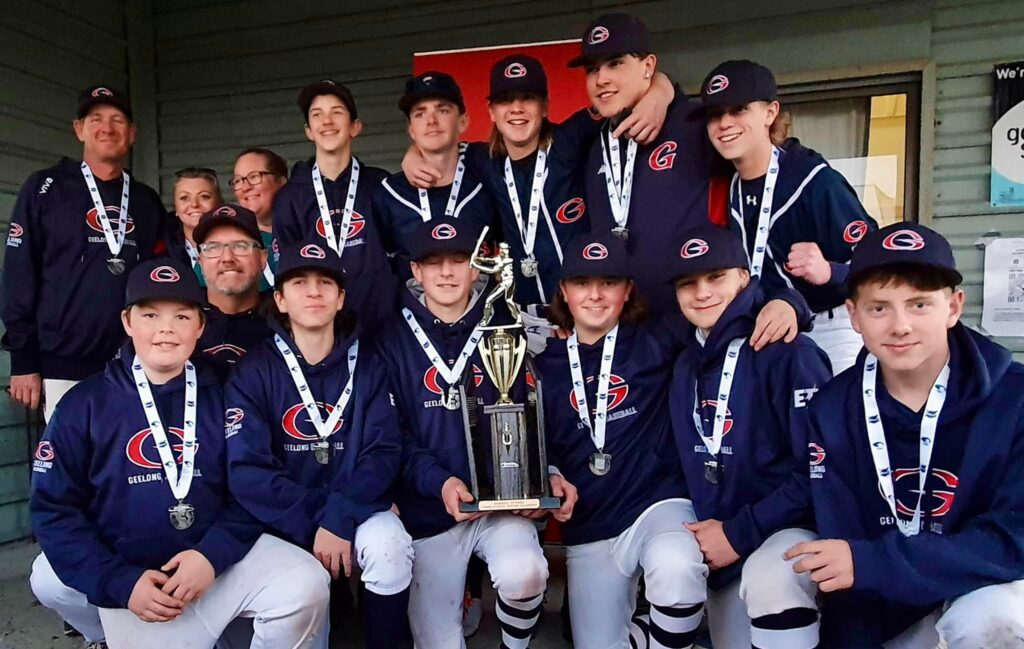 Congratulations to Geelong on winning the 2022 U16 State Winter Championship!

The champions had four wins and a draw over the weekend in Latrobe Valley. City West and Diamond Valley finished 4-1, followed by Latrobe Valley at 2-2-1 and Dandenong at 2-3. Bendigo and North Eastern both had a draw.

Well done to all participants and congrats to Geelong and the MVPs:

Thanks to Ausport, three $50 vouchers were awarded to MVP award winner Jesse Hando from Bendigo and standout hitter Jordan Ellis and pitcher Riley Peoples from Geelong.

Check out Sunday game recaps below and head to GameChanger for all results.

Bendigo couldn't keep up with Dandenong despite a strong start from Callum Bolton with a single in the first inning.

Parker Schutt toed the rubber for Dandenong, giving up zero runs on two hits over two innings, striking out three and walking one.

Bolton was on the pitcher's mound for Bendigo. The pitcher allowed three hits and five runs, walking one. Jesse Hando threw one-third of an inning out of the bullpen.

Hando and Bolton each collected one hit to lead Bendigo while Dandenong had seven hits total, including two apiece for Joshua Villanti and Jesus Camacho. Dandenong tore up the base paths as three players stole at least two bases. Harry McMillan led the way with three.

Latrobe Valley tied the game on a walk in the fifth inning for an 8-8 draw with Geelong.

Geelong got things started in the first inning when Tanner Stack doubled on a 2-0 count, scoring one run.

Latrobe Valley scored five runs in the fourth inning on walks by Alex Smith and Liam Duncan, a single by Ryan Glass, a fielder's choice by Connor McKenzie, and an error on a ball put in play by Morgan McConville.

Glass went 1-for-1 at the plate to lead Latrobe Valley in hits. Jordan Ellis led Geelong with two hits in two at bats.

North Eastern had trouble keeping up with City West in an 11-2 loss on Sunday.

City West scored five runs in the third inning thanks to doubles by Montgomery Pithouse and Nathan Runbelow, a walk by Jai DiBlasi, and a single by Hudson Pallay.

Walter Le Ferve led things off on the hill for City West. The pitcher allowed one hit and zero runs over one inning, striking out one and walking zero.

Austin Clear was on the pitcher's mound for North Eastern. The bulldog surrendered six runs on five hits over one and two-thirds innings, striking out one.

Clear, Sayah Parley, and Hunter Wilson each managed one hit for North Eastern as the team didn't make any errors in the field. Liam Cathie had the most chances with two.

City West scattered ten hits in the game, including two apiece for DiBlasi, Pallay, and Pranav Mittal. DiBlasi led City West with two stolen bases, as they ran wild on the base paths with eight stolen bases. Carson Thomas had five chances in the field, the most on the team.

An early lead helped City West defeat Dandenong 8-4 on Sunday. City West scored on a walk by Carson Thomas, an error, and a single by Walter Le Ferve in the first inning.

Nathan Rumbelow got the start for City West. The fireballer allowed two hits and two runs over two and two-thirds innings, striking out seven.

Hayden Ochoa was on the mound for Dandenong. The hurler allowed one hit and five runs over two-thirds of an inning, striking out two. Kai McDonald and Ned Johnson entered the game as relief, throwing one inning and one inning respectively.

City West smacked one home run on the day. Rumbelow had a four bagger in the third inning.

Le Ferve went 2-for-2 at the plate to lead City West in hits. The side didn't commit a single error in the field as Montgomery Pithouse had the most chances with nine.

Diamond Valley's two pitchers didn't allow a single hit in a big win over Bendigo. Zachary Locklier induced a groundout to get the last out of the game.

Daniel Crichton led Diamond Valley to victory by driving in four runs. Crichton went 3-for-3 at the plate, driving in runs on a triple in the first and a double in the second.

Diamond Valley got things moving in the first inning with a 2-RBI single from Ben Grady. Evan Sertis, Zak Stafilis, and Crichton each had RBIs as the team added five runs in the second.

Joshua Bence was on the pitcher's mound for Diamond Valley. The fireballer went three innings, allowing no runs or hits with four strikeouts.

Jackson Harris toed the rubber for Bendigo. The pitcher allowed five runs on four hits. Lachie Dennis and Phoebe Martin entered the game as relief, throwing one and one-third innings and one-third of an inning respectively.

Diamond Valley racked up 12 hits in the game. Crichton went 3-for-3 and Sertis had multiple hits too. Three players stole at least two bases as Stafilis led the way with three.

North Eastern fell behind early and couldn't come back in a 17-1 loss to Latrobe Valley on Sunday. Latrobe took the lead on a wild pitch in the first inning.

The fifth inning was a big one for Latrobe, adding five runs on RBIs from Jesse Wilson, Shrader Hicks, and Jarrod Thomas.

Jack Thomas was on the hill for Latrobe. The fireballer allowed two hits and one run over four innings, striking out four.

Ollie Chambers led things off on the pitcher's mound for North Eastern. The hurler surrendered seven runs on four hits over two and two-thirds innings, striking out two. Sayah Parley threw one inning out of the bullpen.

Latrobe Valley Baseball Association collected 12 hits including two apiece for Morgan McConville, Austin McConville, and Riley Duncan. The team tore up the base paths as four players stole at least two bases. Riley Jackway led the way with four while Thomas had the most chances in the field with seven.

Bendigo had a tough time generating runs on Sunday, dropping their game with City West 9-1.

Baxter Maynard led things off on the pitcher's mound for City West. The bulldog lasted two innings, allowing zero hits and one run while striking out three.

Nicholas Walker went one and two-thirds innings for Bendigo, allowing four runs on five hits and striking out two. Marcus Murphy threw one-third of an inning in relief out of the bullpen.

Murphy, Jesse Hando, and Lachie Dennis each collected one hit to lead Bendigo.

City West didn't commit a single error in the field. Pithouse had four chances, the most on the team. City West stole seven bases during the game as two players stole more than one. Spencer Tyers led the way with two.

Latrobe Valley watched the game slip away early and couldn't recover in a 15-1 loss to Diamond Valley on Sunday. Diamond Valley scored on singles by Zak Stafilis, Ben Grady, and Ryley Shanks in the first inning.

Patrick Matthews led things off on the hill for Diamond Valley. The ace lasted three innings, allowing one hit and one run while striking out two and walking one.

Jesse Wilson and Austin McConville pitched for Latrobe Valley. Wilson led the team with one hit in two at bats.

Diamond Valley collected 14 hits on the day. Evan Sertis went 3-for-3 at the plate to lead the side, with Grady and Stafilis also recording multiple hits.

Geelong scored five runs in the third inning thanks to singles by Patrick Johnson and Allistaire Lang and doubles by Bradyn Barker and Cade White.

White toed the rubber for Geelong. The hurler allowed zero hits and three runs over two and two-thirds innings, striking out six.

Hunter Richardson led things off on the mound for Dandenong. The pitcher lasted two innings, allowing five hits and seven runs while striking out three. Brooklyn Riwaka-Kinney threw two-thirds of an inning in relief.

Geelong totaled ten hits including multiple for Johnson, Barker, and Tanner Stack, who had three out of eight stolen bases.