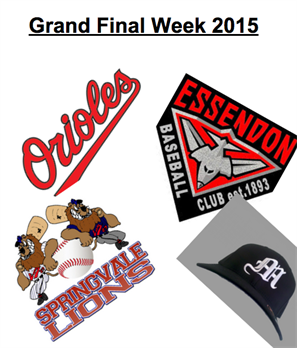 Essendon made their way through to the best of three Grand Final series which kicks off tonight at 7.30pm at MBP. The Bombers came in after two wins over Geelong in the north-west conference semi final series. The Baycats will be looking back on the series and thinking of what might have been, as they pushed their opponents in both games.

In their first game Evins of Geelong and Gareth Formisano for Essendon put on a pitching display and held the batters for six innings. It was then that Essendon broke out and scored two in the 7th. The Geelong outfielders put on a real show in that game but the Bombers pressure proved too much.

In the second game it was a battle of the long ball as both teams hit home runs at Boeing Reserve and Essendon won it 5-7.

In the south-east conference Melbourne came back late in game two when Boon homered in the top of the 9th. With that result the Demons pushed the semi-final series to a third game. The Orioles were too good in the end though as Adam Bright pitched seven shut out innings and drove his team to a 6-0 victory. Three of the most critical Oriole runs came from the bat of their youngest player Jacob Evans. He scored 3 RBIs with a double in the 7th and increased the lead from 1 to 4. See match report here.

Moorabbin came into the semi-final series against the Giants with an impressive hitting line-up. Werribee started Taylor Rowe against Musson for the Panthers in game one and both pitchers threw straight and well. The Giants broke game one open with home runs from George and Box that put them in the lead but the Moorabbin line-up wore them down in the end and walked off in the 10th innings of both games. See the match report here

Springvale made the finals by winning their last five games of the regular season and then met with minor premiers Sunshine in the semi-final series. The Lions accounted for the Eagles in two games and will meet Moorabbin in the Grand Final series starting tomorrow night Wednesday March 4th at 7.30pm at MBP.

Congratulations to Springvale Div. 1 women’s who won the flag in seven innings over a gallant Doncaster outfit. See the match report here.