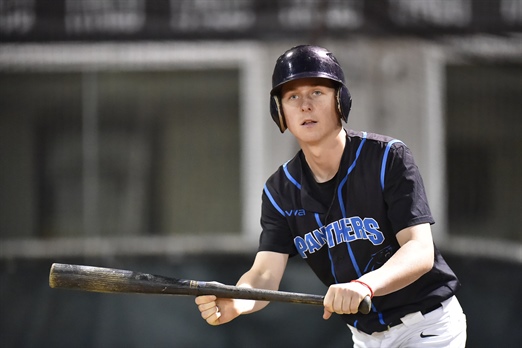 At the start of the 2019/20 VSBL season, 15-year-old Tom Brookes had his sights set on another strong summer with Moorabbin Panthers Baseball Club.

The outfielder made that happen, as his hard work and dedication paid off with not one but two premiership flags. Tom was part of the winning U16 State and Division 2 Reserves teams, both of which finished atop their respective ladders before securing Grand Final glory.

In order to achieve such great results with his beloved teammates, Tom remembered some valuable baseball advice over the course of the season. “I think that what I’ve been taught in baseball is when you have a low, its real low but when you succeed its really good,” Tom said. “I was taught to wait for success and when it comes you celebrate that.”

There was certainly a lot of success to be celebrated at the end of this season, which Tom attributes to a great team spirit on and off the field. “I think our team has succeeded because chemistry is important, being friends with all your teammates and working together,” Tom said. “A baseball team will always have more success if they can perfect the small ball, hitting a single to score a runner and playing for your teammates, not playing for yourself.”

With a memorable season in the books, Tom is grateful he decided to give baseball a try a few years ago. “My brother moved to Moorabbin from another club, and they were short on numbers, so he suggested that I come down and give baseball a try,” Tom said. “I thought it was very different because I came from a cricket background. I thought it was really exciting and fast.“

Tom’s been able to integrate some of his cricket skills like hand-eye coordination into his game, but at the end of the day what he loves the most is getting play with his teammates. “Moorabbin is where it all started, and my mates are there,” Tom said. “I think every year is more fun than the last, so it brings me back the next year. I play summer and winter and I keep coming back to baseball to have more fun.”

In addition to making memories out on the field, Tom also wants to further develop his skills. “As I get older, I get exposed to more knowledge and coaching and I feel like I’ve expanded my own abilities,” Tom said. “Moorabbin has put lots of work in with the juniors mixing with the seniors. The seniors at all clubs have lots of knowledge because they’ve played the game for longer, and this year Moorabbin had the seniors talking to the juniors a lot more about the game.”

No matter where his baseball journey may take him next, Tom will forever hold fond memories of playing for Moorabbin, which ultimately led to him earning a spot to represent the Southern Mariners Baseball Charter at the 2018 Australian Junior League Championship. “We didn’t win the final, but that match is probably the best experience of my life,” Tom recalled. “We went to extra innings, lots of people were watching and I had so much fun playing with this awesome group of kids. I kept on winning games and everyone was playing their best baseball. The whole tournament and especially the grand final was the best.”

Playing for the Mariners and taking part in Aces Academy helped to prepare Tom for what turned out to be a massive summer season with Moorabbin. He hopes to see others give the sport a try and find a local club where they can thrive. “I wasn’t sure about it when I came down and now I’ve stopped playing other sports because I love baseball so much,” Tom said. “I’d say give it a shot, you never know, you might end up being really good at it.”

The Panthers prevailed in this past season under the watchful leadership and guidance of coach Ben Laux, and Tom was thrilled to learn from him as he keeps working toward his goals and prepares for a bright future in baseball. “I think most people, when they are playing baseball around U14 or U16 age, are aiming high for college or to play in the big leagues even,” Tom said. “You have to aim high and see what happens, there’s no point in hanging low.”