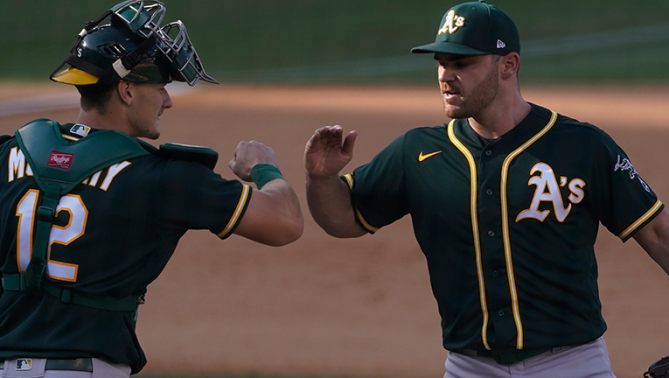 The 2020 MLB playoffs are in full swing with divisional series well underway after the 60-game shortened season. Both teams with Aussies on their 40-man rosters made the postseason, although the Minnesota Twins lost in the first round, ending the season for Victorian Lewis Thorpe. Fellow Aussie Liam Hendriks advanced with the Oakland Athletics, but they just lost their divisional series to the Houston Astros to cut their postseason dreams short.

Even so, our Aussie representatives have impressed on baseball’s biggest stage and continue to make names for themselves in the majors.

The Victorian pitcher did not make a postseason appearance as the Twins' dropped the AL Wild Card series to the Houston Astros, extending their painful playoff losing streak to 18 games.

Minnesota finished the season with a 36-24 record to win the AL Central back-to-back.

In his second season with the Twins after his MLB debut on 30 June 2019, Thorpe threw 16.1 innings across seven games, with 4.2 scoreless innings in his first two outings. He gave up 24 hits for 11 earned runs with an ERA of 6.06 and 10 strikeouts.

MLB All-Star and two-time American League Reliever of the Month Liam Hendriks had a phenomenal year although the A's postseason run came to a close earlier than they would have liked.

Oakland bowed out of the MLB playoffs following an 11-6 loss to Houston in game four of the American League Division Series on Thursday.

Hendriks did not get into the game as the Astros blew the contest open at Dodgers Stadium.

Carlos Correa hit a go-ahead, three-run homer after Michael Brantley’s two-run shot in the fourth inning as Houston erased an early 3-0 lead held by the A’s.

Correa drove in five as the Astros advanced to the AL Championship Series for the fourth consecutive season. They will play either the New York Yankees or Tampa Bay in the best-of-seven ALCS in San Diego.

Ramon Laureano hit a pair of homers, including a three-run shot in the second that gave Oakland an early lead for a fourth-straight game. He hit a second to lead off the fifth and pull the A’s within one, but that was as close as they came.

Houston scored the next six runs before a pair of two-out ninth-inning runs from Oakland.

The day before, Hendriks helped Oakland stave off elimination after playing a starring role in game three's 9-7 comeback victory. He entered in the seventh with the score tied and tossed three scoreless innings in a comeback 9-7 victory for the A’s at Dodgers Stadium.

Hendriks was rested up after not pitching in the opening two games. He allowed one hit and did not issue a walk while striking out four in three strong innings.

He stranded a pair of runners in scoring position to end the eighth after Kyle Tucker reached on catchers interference and Carlos Correa singled off Hendriks to start the frame. They advanced to second and third on a ground ball but Hendriks battled back to punch out Josh Reddick and end the threat.

Hendriks then retired to top of the Astros’ lineup – George Springer, Jose Altuve and Michael Brantley – to complete the victory and extend the best-of-five series at least another game.

Oakland tied the ballgame on Chad Pinder’s three-run homer in the seventh ahead of Hendriks entering. Sean Murphy and Pinder then brought home runs with sacrifice flies in the eighth to make it 9-7.

It was former Perth ABL pitcher Hendriks’ first MLB postseason win. He tossed 37 pitches, 26 of them for strikes.

Earlier, the A’s struck first as they looked to stay alive after falling down 2-0 in the series. Tommy La Stella hit a solo homer in the first.

Altuve went deep as part of the two-run bottom of the inning for Houston. Solo shots to Mark Canha, Matt Olson and Marcus Semien gave Oakland a 4-2 lead.

The Astros put up five runs in the bottom of the fifth to take the lead and put the A’s on the brink of elimination. But Hendriks – and late offence – ensured a game four.

Don’t forget you can get your MLB fix on Kayo, with the Australian sports streaming service bringing you some of the biggest games streamed live each week. Watch the exciting postseason action as the race to the World Series continues.