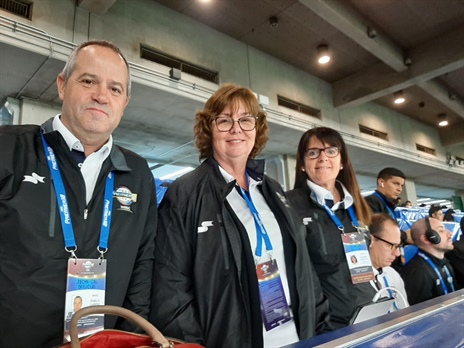 Jennie Moloney, a well-known scorer in the Victorian baseball community, received recognition for her dedication to scoring as she was named Scorer of the Year by the World Baseball Softball Confederation (WBSC).

WBSC presented its Individual Awards during last week’s Gala Dinner, and Jennie was recognised with the 2019 Scorer of the Year Award for her support in the global effort of scorers.

This is a well-deserved accomplishment for Jennie, who is one of five members of the WBSC Scoring Commission and a life member of Williamstown Baseball Club where she has been scoring for more than 40 years.

Jennie was surprised to receive such this prestigious award. “I had no idea that I was even in contention to be considered as the WBSC Scorer of the Year, so it was a huge shock, but a wonderful one,” Jennie said. “I feel very honoured to have been selected from many very deserving International scorers. But scoring is about being part of a team and working together so I have to thank all the other scorers I've worked with over many years for their friendship and support which has helped me in being selected to receive this award.”

It’s been a big year for Jennie as she continued to pursue her passion, heading overseas to score at the Premier 12’s in Seoul and Tokyo earlier this month while also working with a Korean company to develop the software that will be used for scoring baseball at the 2020 Olympics in Tokyo. Other highlights for Jennie this year included attending a Scoring Commission conference in Switzerland, instructing a softball clinic in Bangkok and scoring at an Olympics Softball Test in Fukushima.

Jennie’s love of scoring began in 1976, when she began dating her husband and went to Williamstown to watch him play. She quickly got roped into scoring, and she hasn’t stopped since. “Scoring has given me fabulous experiences to look back on, like being selected to score at two Olympic games (Sydney and Beijing) and to travel the world and meet great people,” Jennie said. “Being involved in baseball has created lifelong friendships.”

Over the course of Jennie’s scoring career, she has earned her CABS Australia Level 5 Accreditation and scored for a variety of events, ranging from club games to national championships and international competitions. She’s also one of the official scorers for Melbourne Aces in the Australian Baseball League.

Jennie looks forward to continuing her scoring efforts for many years to come. “I just want to keep enjoying what I’m doing and help other scorers pursue their scoring dreams so that one day they might be in the position I'm in now,” Jennie said. “Scoring baseball is a fabulous hobby. It helps you understand the game and fall in love with baseball. It is a great way to make lifelong friends and keeps your brain active. It can be challenging but hugely rewarding.”